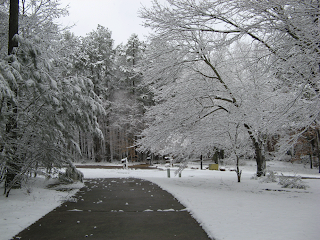 Here in Raleigh, NC snow is rare. That said we have had more than our share this winter. Last night it snowed another 3 inches. Now, I know the mid-atlantic and northeasteners will laugh and roll their eyes, just as I did when I moved here from upstate New York. But!! I am not kidding when I say 3″ of snow can keep you in your house for days.
The first year we lived here in Raleigh, we moved from the Poughkeepsie NY area, I was so excited to see the snow, 2″ of snow!  I love the change of seasons and was so afraid that I would miss that in Raleigh. I was outside with all the locals taking pictures of the kids in the snow like I had never seen snow before! The day before there was a mad dash to the grocery store for bread and milk and I was rolling my eyes thinking how crazy that was, we were only going to get 2″ of snow. Silly, silly me. The snow was hard and icy, not soft and fluffy and we were in the house for a couple of days until the snow melted enough to venture out of our development onto the main streets.
Two weeks ago, we had 6″ of hard and icy snow and we were indoors for 4 days! Our development never saw a snow plow, so we had to wait until it melted enough to drive through. So, I am now in the grocery lines with everyone else at the first threat of snow!
The good news from last nights’ snow, is that it is light and fluffy and the snow fairies even blew the snow off of our driveway, so I should be able to vensure out today.