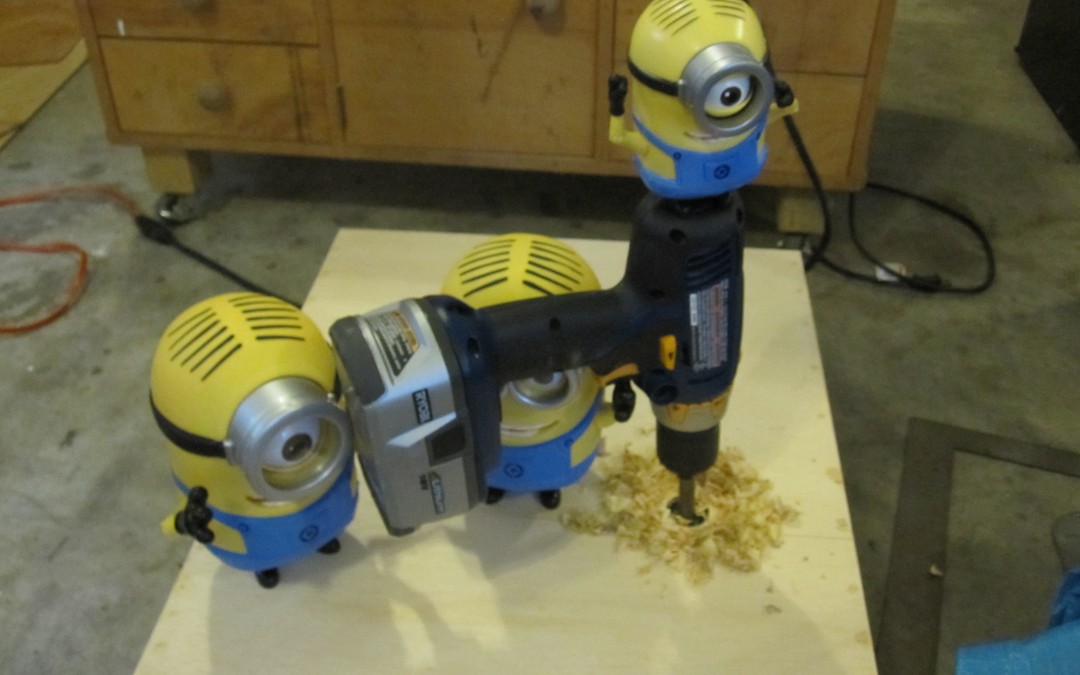 Mr Laura here. I took a break from my normal duties “Carrying Heavy Things” to build a wooden case for the cash drawer that I could also mount the Square Stand and receipt printer on top of. We have just added a barcode scanner to the setup that will hopefully allow faster checkout. In the retail shows it can become quite busy at times and now that Laura is carrying so many notions and purse hardware items things got a little bogged down occasionally at the Charlotte show and we hope to speed things up.

I built the case yesterday. I used three quarter inch plywood and that was probably overkill, but hey, an elephant might step on it, so better safe than sorry. The idea was to make the case counter top height to make it easier for customers to sign the iPad when using a charge card. Today Dave (my trusty minion), Stuart, and Mini Stuart were a little bored with the rainy day and offered to help. Dave, Stuart, and Mini Stuart said they would handle drilling the holes for the Square Stand mounting and wires, and the hole for the cable and power cord for the receipt printer. I was a little uncertain if they could handle this as (don’t tell them I said this) Stuart and Mini Stuart are somewhat challenged in the depth perception area and they all have Very Short Arms. However, capitalizing on Teamwork, with Dave (my trusty minion) providing the binocular vision, Stuart providing the muscle, and Mini Stuart’s ability to Get Into Small Spaces they did a more than acceptable job. 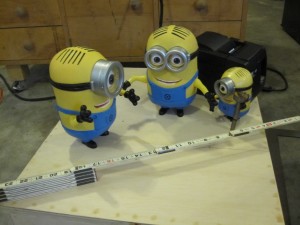 After carefully discussing their options the minions created an action plan. They measured the power plug for the printer and determined that the hole would have to be at least one and one quarter inches in diameter. Mini Stuart was dispatched to find the largest available drill bit while Dave (my trusty minion) and Stuart measured out the marks. Mini Stuart returned about 30 minutes later with my largest bit, fortuitously,  a one and one quarter inch Forstner bit. (This might seem like a really long time to get one drill bit but the drawer I keep these in is a good 5 feet off the ground and that bit must weigh as much as Mini Stuart does). After a somewhat comical first attempt where the drill bit stayed in one place and the drill spun around giving Dave quite a ride, they went to plan B and used all available minion hands to get the job done. 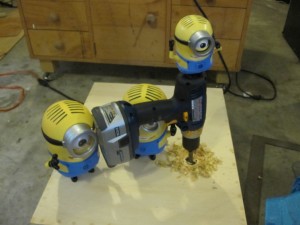 Stuart Holds, Dave Triggers, Mini Stuart Jumps Up and Down

After successfully completing the hole for the receipt printer, the minions also added a mounting hole and two different wiring hole options for the Square Stand.  Unfortunately, as Mini Stuart took another 30 minutes to return with each new bit I fell asleep and missed getting photos of this part of the project. But upon awakening I did find they had completed the holes and swept up the chips. After carrying the case in to our test booth in the living room, Mini Stuart volunteered to hook up the cables and install the the Square Stand mounting screw. He said his six inch height (he is five inches tops) would make him the best choice for working inside the case and this proved very true. After that I placed the cash drawer in the case and the minions installed the iPad in the Square Stand. 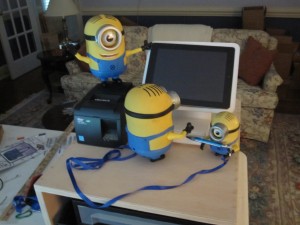 Everything fit as planned, and after high fives all around, we tested the scanner, cash drawer (did I get get that $5.00 bill back), credit card reader, and receipt printer.  Everything worked great and I brought the case back to the garage so I can put a couple of coats of black enamel paint on it tomorrow. (As dirty as they got using just the drill I don’t think I will tell them about the black paint part).