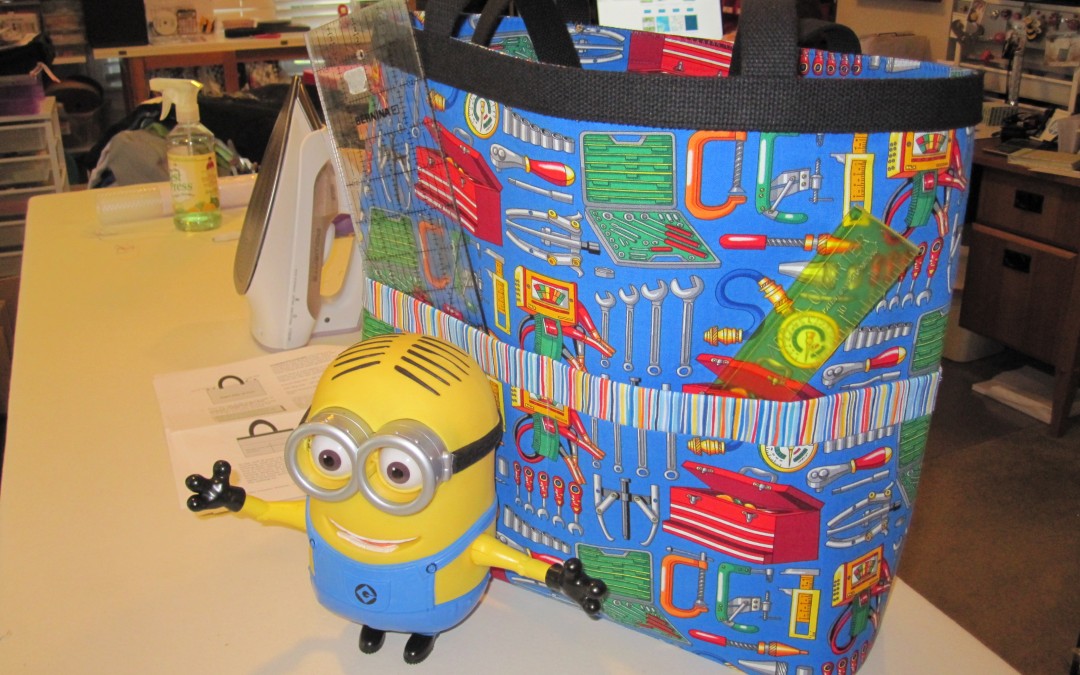 Well, it is true. Anyone can make a Laura’s Tote they can be proud of if they follow these directions! Dave and I put this baby together in only twice as long as it would have taken Laura. I am pretty sure we could do it much faster if we did a second one. 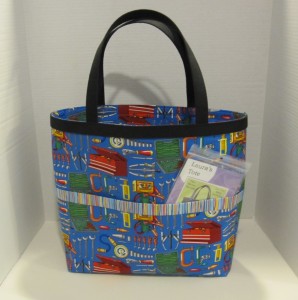 In spite of our bravado yesterday that we would breeze through cutting and fusing, the first mistake we made was in cutting the fabric. Dave was rambling on with a story about meeting a mermaid in Maui which caused a lack of concentration on my part, the net result of which was one of my fabric pieces was forty inches rather than forty one like the other three pieces. Mr Laura said several Bad Words but Laura said “Don’t worry about it”. Mr Laura said several more bad words expressing some skepticism. Laura said again, “Don’t worry about it, make all the pieces forty inches, or don’t if you don’t want to, this is a very forgiving pattern no one will ever know (except anyone who reads this blog, plus any one they tell, and any one those people tell), “It all gets covered up in the side seam”.  As at this point I had no idea what ‘covered up in the side seam’ meant, I proceeded to shorten them all to forty inches. Suspending our disbelief that this had not Ruined The Whole Thing, Dave and I proceeded.

Laura suggested we take out the mangle to fuse the pieces but Dave and I insisted we were doing it the way the pattern said so we did it with the electric hand iron. While keeping with the purity of our concept this does take quite a bit longer as you have to hold the iron in one place for five to six seconds to fuse it well and that was a lot of five seconds. After some period of time we were done fusing and were ready to Start Sewing.

At this point we called in Laura, who apparently thought I was kidding about not knowing how to run a sewing machine. She seemed to believe that my frequent walks through the sewing room while she was sewing should have given me a better grounding in the basics but I was clueless. Personally I don’t think that since she has watched me use a table saw many times she would feel good about cutting her own wood, but maybe she could surprise me. Anyway after finding the o-n, o-f-f switch and getting a quick tutorial on threading the machine and needle, changing a bobbin (these machines are not made for fat fingers), and sewing one six inch piece of scrap fabric, I was declared trained and sent to the deep end of the pool. I did the first long seam. I was Very Unhappy with the result. This (now forty inch rather than forty one inch) seam was wavy as heck. Laura looked over from her computer and said “Don’t worry about it, it is fine. When you do the next step it will all straighten out”. Dave and I were again forced to suspend our disbelief and we proceeded. Son of a Gun if ironing the seam open did not result in a nice straight seam. Dave and I bent over and sighted down the seam like I would do to check if a board is straight which produced hysterical laughter from behind me. Laura asked “What are you doing”. I told her “Checking if the seam is straight”, producing more hysterical laughter. Women. 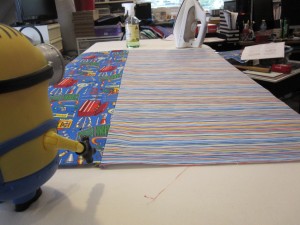 The next steps went pretty well, but is an exercise in trust since you are kind of working the bag inside out till the very end. I did get an inkling at this point about how all these ragged edges would disappear soon. I got pretty absorbed in the process and did not remember to stop to take pictures. My general impressions were, I can take or leave straight stitching, I do not like basting (only used if you do the optional pockets), and I love zigzagging. I sew much much straighter if I draw a line which was OK as it all gets hidden later. 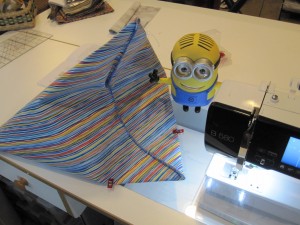 Anyway after turning the bag right side out it actually came out looking really really good! My pocket seams all lined up, my side seam looked really clean and straight! The hardest actual sewing was putting on the handle and rim. Laura was all excited at this point as the bag looked so good and I had to stop her from helping me finish it off. She did cut the handles and rim belting before I could stop her but I am fairly sure I could have made those three scissor cuts correctly myself.  Sewing the handles and rim involve a lot of pulling and tugging the stiff bag around the sewing machine. I did finally win the wrestling match with the bag but managed to hit the touch screen once changing the stitch in flight, unlatch the foot while sewing, breaking a needle, and running out of bobbin thread. This last problem Ticked Me Off as I did not realize it until about two feet later in the rim. I have to say Laura was a good sport about all my issues running the machine even the broken needle.

In spite of my total lack of sewing skills my bag looks awesome! I am very proud of my bag! That trust exercise of doing most of the work inside out resulted in my mistakes all being hidden inside the lining somewhere. Laura was actually beaming and clapping, I can see why her students like her classes so much! Even though it sounds a little narcissistic, I may put more pictures of my bag on the creations page. 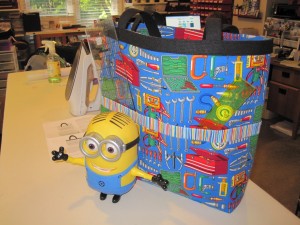 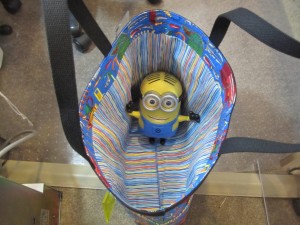