I just returned from having a booth at my first quilt show. Now, “just” is a relative term. Today is Thursday and I actually returned Sunday night, but it has taken me this long to recover and I’m still not completely unpacked. I think I’m doing something wrong!
I am familiar with having a booth at a show because I used to go to lots of craft shows in the early 90’s. That was when I made all the bags and sold the completed bags. BUT, that was almost 20 years ago when I was that much younger! My mother was right, “Growing Old is Pigeon Poop”!  Many years ago, she came up with that saying, and we have been saying it ever since; now I know how true it really is.  Do you think all this age talk has anything to do with the fact that I will turn 55 (senior citizen) this month and that I am letting my gray hair grow in (maybe a temporary thing)?  I’m having a little pity party.
Anyway, the show was a good learning experience. It was the first year for this show in Hickory, NC. The Bernina dealers did a great job putting it together and had  65 vendors and a wonderful quilt show. I’m sure the people that attended the show were impressed. The only problem was that there wasn’t that many people that attended so it made for a slow show for the vendors. After talking to other vendors, I was reassured that this was not a typical show for sales. I’m not complaining because I needed a show to get my feet wet and if it had been busy we would have crumbled. My husband and daughter came with me for moral support and physical help. By the 3rd day, I think we had everything under control. The 3 of us had fun spending time together and on 3 occasions people poked there heads around to our booth and told us we were having way too much fun! There was a lot of laughing involved. 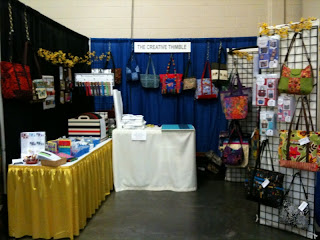 Here is a picture of our booth.